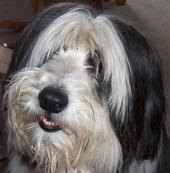 I have a dog. A really cute dog. But a hearing or guard dog, she is not.

When I first got Maggie, an adorable Bearded Collie, from the Beardie Rescue, I had all sorts of plans for her. I had wanted a dog that looked like her all my life, but never could get one. Finally my dream had come true! I had also thought about getting a hearing or guard dog at some point, so, naturally, I figured I could make two dreams come true with one full sweep.

That dream never came to fruition.

Oh, Maggie’s a great dog. She doesn’t bite, hump legs (I think only boy dogs do that anyway), or pee in the house…usually. She doesn’t growl at strangers or drink from the toilet…most of the time. She doesn’t get into the trash or pester me all day for a snack either….for the most part. Come to think of it, Maggie doesn’t do much of anything. Unless you include laying spread eagle on the living room floor and occasionally licking herself doing something.

So, when I set off to train her, I had no idea where this would lead.

At first, I tried the use of signs, but there was no getting her to open her eyes, no matter how much “noise” I made. After a while, I figured I would use my voice at first and then ease her way into signs. Ease.

“Come here, Maggie!” Maggie lie on the floor, not even her ears twitched. “Maggie, come!” She shifted a bit, then sighed a huge sigh and went back to sleep. “Maggie, help me! I’m being attacked! Help! Help!” Maggie opened up one eye, licked her chops and returned to Dreamland.

I had to get serious. Even if I couldn’t have a hearing dog per se, I at least wanted a semi-functional guard dog.

I decided to try it out. I asked a friend, whom Maggie had not yet met, to barge in the front door, while Maggie lay sleeping (again) in the living room. I watched from the kitchen, and when the “stranger” stormed in, I started screaming, “Help! Robber! Thief! Murderer! Rapist! Help, Maggie! Help me!” Maggie slowly lifted her head, glanced at me, glanced at the “stranger,” and went back to sleep.

Nothing was working! It was driving me crazy! Do something, girl! Bite! Maim! Sic! Anything!

Finally, I had one last plan. I decided to fake my own life-threatening tragedy. I mean, she had to do something when she found her beloved owner lying on the floor with blood on her face, right? So, I got out the ketchup, poured it on my face (yuck!), stumbled into the living room, and “fainted” onto the floor in front of where she lay. I began to moan, “Ohhhh….someone…please….help…me….I’m…bleeding.” Then I gave a huge, theatrical sigh and succumbed to my demise.

I slowly opened one eye to see what Maggie’s reaction was. She was chasing cars in her sleep. Dreaming away, barking and moving her legs as if to run. I did what any unconscious victim would do. I flicked her really hard on her butt and tried again. “Help…Maggie…”

Thirty seconds later, Maggie slowly got up, stretched her front legs, then her back legs, walked up to me, and began licking the ketchup off my face. When she was done, she gave a good, long yawn, walked across the room, and went to sleep on the couch.

Instead of a victim to be rescued, I was a mid-afternoon snack.

I have a dog. A really cute dog. But a hearing or guard dog, she is not.
Posted by Michele at 1:44 PM