STEREOTYPING: Do You Stereotype the Deaf and Hard of Hearing Community? 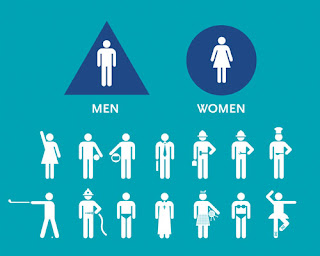 ster·e·o·type /ˈsterēəˌtīp/ : Noun: A widely held but fixed and oversimplified image or idea of a particular type of person or thing.

I’ve done it. Admit it, so have you. In fact, I’d have a hard time believing anyone who says that they've never once in their lifetime applied a stereotype to another person. It’s a sad, sad fact that that’s what happens all too often in the world. And, while I’ll honestly and sheepishly admit that I’ve stereotyped certain individuals, I can also honestly say that I’m ashamed. That makes everything all right. Right? Uh...no.
I preach and preach about not doing that very thing, and, yet, there I was on Father’s Day, at a restaurant filled to the brim with different people and groups to judge. And judge, I did. Shame on me.
Tables filled up with lazy people (heavyset and people who chew with their mouths open), racists (bald white guys with tattoos on their necks), and people who could no longer care for themselves (the elderly). Isn’t that just awful of me to write "out loud?"
Think about it. You see heavy people, bald people, tattooed people, people wearing culottes and hair bonnets, or people of different ethnicities. You see them and you immediate get a thought going through your brain. A thought that says, “I know these people. I know their type. These people are people who…(fill in the blank)." For most people, I would like to hope, it’s a passing thought that you don’t pay much attention to. But for some, maybe not.
Are you reading this and thinking, “Not me. I never stereotype people?” Hmmm. Well, if it’s true, you are definitely someone I’d like to be friends with. A person of character. A little delusional, maybe, but well-meaning.
But even though I find it hard to get out of my head (at the first moment), who am I to judge the judgers when I become upset by those who stereotype me?
I’m Deaf. People don’t usually really judge me before they find that out. That's because there's no way to tell I'm Deaf till I start signing. But once that’s discovered, watch out. All of a sudden I can’t drive, speak, make love, learn, laugh, comprehend, or interact. I was sent away for school where I learned how to use ASL and lean on others in this society. If I’m lucky, I can read at a 3rd grade reading level and learn to do manual labor. If the cards are in my favor, I will meet a hearing man who will take me under his arm and protect me from the confines of this world. Perhaps I will have children, but they will be cursed with deafness and amount to very little.
Sound like the ideas of anyone you know? I hope not, but it’s likely you think it does.
And then, maybe, by a long-shot, they’ll get to know me. A college-educated, published author with a keen sense of humor (I think I’m hilarious), who is only THE best driver on the road (don’t question this—just accept it). I speak as clearly as a hearing person (though I’m told some hearing people don’t speak so clearly), make love just fine (I would like to hope), learn quickly (E=MC2) and am able to function just fine in this “Hearing World” (I  HATE that term) we live in. I’m not a stereotype. I’m just me. And that should be enough for anyone.
So, as I sat judging at the restaurant and getting irritated at how many tables were staring at us, enjoying the hand show as we tried to enjoy our meal, I realized that I was wrong. I’m wrong to stereotype. Just as wrong as those who stereotype me.
The next time you see someone or witness part of a circumstance, ask yourself, how would you feel if the roles were reversed? Could that have been you? And if you reacted in a way perhaps too familiar, would that make you a stereotype?
The Bible talks about the splinter and the plank. If you don’t know what I mean, look it up. I have a splinter. That much I know. But it wasn’t till I was trying to leave the restaurant that I noticed that plank sticking out of my eye. It ain't easy walking through a swinging door with that thing. What? You say you don't have one? Hmmm.
So, tell me? Do you stereotype? Do you judge me or any of the million of people with hearing loss? If so, I’d love to hear from you. I’d love for you to come forth and leave a comment telling me just what I am and how I behave.  Because, I for one haven’t the faintest clue. It depends on my moods and feelings. In fact, I’m not quite myself today. Maybe I’m you.
Posted by Michele at 9:26 PM