"I'D HATE BEING DEAF -- I LOOK TERRIBLE IN BLACK" 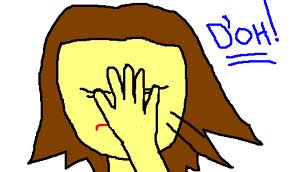 If you’ve read my blog, you may remember that I (and probably most deaf people) have people telling me the strangest things and asking me some of the most bizarre questions I ever thought I would be asked. Sometimes they're annoying, many times they just crack me up, but they always leave an impression on my mind.
I was sitting in a local Applebee’s, studying the menu, when the waitress approached. My husband was preoccupied, trying to help our kids decide if they liked anything on the kids’ menu, so the waitress naturally turned to me.
Of course, I was so entranced in the menu that I didn’t even realize she was standing there. She must have stood there for a good three to five minutes before I noticed her out of the corner of my eye.
“What would you like to drink?” I think she asked.
“Huh?” was my eloquent retort.
Kenny turned to me and signed, “DRINK WANT WHAT?”
The waitress just about turned the color of a beet. “Oh, I didn’t realize she was hearing impaired.” (Grrrr..) “What do you think she wants to drink?” Kenny chuckled to himself, probably debating whether to tell me what she just said or let it go. For the time being, he waited for me to answer and interpreted for me.
A few minutes later, she brought our drinks and asked about what we wanted to order. Of course, by this time she wasn’t even acknowledging my existence anymore. I must have scared her too much…my Deaf Fangs and all. When everyone else had ordered and it was my turn, she turned to my husband and, once again, asked him what he thought I would like to eat. What am I? A dog?
Kenny motioned over to me, where I sat with my finger stuck onto the menu, waiting for her to look. All in all, it wasn’t any different than any other time we’ve all gone out to eat.
So, the waitress brought the food, made sure Kenny and the kids had everything they needed, and left. We dug into our mozzerella sticks and chicken penna and all seemed just fine. About fifteen minutes later, the waitress approached our table.
“Hi! You know, a few of my co-workers and I have been watching you guys sign. It’s just so neat! In fact, we think we might have even understood what you were saying. Did you say….,” and she went on trying to “interpret” what our private conversation had been about. Of course, she was totally wrong, but that’s beside the fact! Privacy?? Hello?!?! Kenny tried to be the polite one as he interpreted to me what the waitress was saying. I simply sat there and glared at her. Will she ever go away??
“I’ve just gotta ask: Does being hearing impaired hurt? I mean, really. She must have to constantly dodge cars when she goes for a walk and I’m guessing she has to walk everywhere, since it’s illegal for those people to drive or even ride a bike. Or maybe they have special devices for them? They’re such fascinating people! You know?”
Yes, stupid-head waitress. We know.
“Sometimes I think I would like to be hearing impaired, but I don’t think I ever could. I mean, no sound at all? And besides, I look terrible in black.”
The only thing that came to my mind was, “Huh?”
She continued to explain:
“Every time I see someone signing at church or stuff like that, they are wearing black. So I know it’s, like, required. Plus I don’t think I could ever stand up in front of all those people. They’d all know I was (whispered “deaf”) then. Is she given a script or anything before she gets up there?” She was serious. I sat there staring at my husband in disbelief. This waitress was not going to leave, so we might as well finish this ridiculous conversation.
I began to sign. “Those are interpreters. They’re not deaf. They’re there to help the deaf and hard of hearing enjoy the service by signing whatever the pastor and other people are saying.” I hoped that would be sufficient in explaining the situation, so I sat, eyes glued to her face, waiting for her to take in all the information.
“Oohhhh.” (Long pause.) When she finally spoke again, it was to be the last thing she said to us before going off her shift. “Well, I guess that’s kind of cool. Still, I wouldn’t want to be like her. It would take me way too long to learn Braille.”
Posted by Michele at 6:18 AM