ALZHEIMER’S, LOBOTOMY, OR SOMETHING ELSE WITH MORE DIGNITY 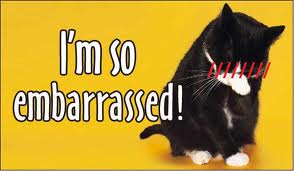 Something many of you probably don’t know about me is that I have, at times, suffered from severe depression. I usually try to deal with it with a sense of humor. (No! Michele thinks something’s funny? Not a chance.) Anyway, sometimes other things don’t do the trick and they’ve had to resort to (GASP!) Electroconvulsive Treatments (ECT) – what most people call “Shock treatments.”) You know, I scare many people a lot because of my deafness, but mention shock and most people run for the hills…or tell me that their long lost son, Bartholomew, is calling and then pretend to answer their cell phone. That might actually work if it wasn’t off when they put it to their ear.

The point is, sometimes ECTs cause memory loss—usually right around the time of the treatment and many times for a week or so around them. I’ve never worried about it. I’ve dealt with it. But within the past couple of months I’ve had  one and I can’t express just how catastrophic the side effects were. I didn’t have “normal” side effects. I had what’s typically seen as “rare” problems. I’ve had several people compare me to someone with Alzheimer's. In fact, it wasn’t until two days ago that I even found out I had a blog. But since finding it and reading it, I feel comfortable telling you guys some of my most recent experiences and hoping you guys don’t judge me—or at least find my senility as hilarious and pathetic as I do. Of course, the best adjective is “frustrating,” but I gotta admit that it’s set me into convulsive fits of laughter from time to time, too, lately.

One of the terrible side effects has been clumsiness. For example, Kenny bought me a tea from Speedway (something I’m addicted to) and I couldn’t get the straw in my mouth. As I sat there, tongue out, moving it around to try to tackle it into my mouth, I lost control of the whole thing and poured it directly and neatly into Kenny’s crotch. It made a perfectly round circle, outlining everything that doesn’t need to be outlined and, needless to say, I lost my drink. Bummer to both of us.

Another terrible side effect is that I can’t fully moderate my impulse control. I’ve always been a sap, but when watching such things as “Family Feud” and “The Newlywed Game” result in tears and heavy, chest heaving sobs of happiness for the players, it can cause some confusion in those around me.

Then there’s confusion.
I’m writing a list of things Kenny needs from the store.
Kenny: “Black Pepper.”
I had no idea whatsoever what that was.
Or
Me to my daughter: “I’ve lost all of my clothing. Do I own a closet?”
She: “Yes”
Me: “Can you draw me direction as to where it is?”
(Sad thing is, I really need them AND I need to keep them on the refrigerator or somewhere I can find them daily, because I’ll forget where they are. Heck, I’ll forget I own a closet. Of course, I’ll probably forget I even have this information on the refrigerator anyway.)

I got into Kenny’s car (it’s a manual) and couldn’t for the life of me get it started. I texted him in a panic.
Kenny: “Did you remember to press in the clutch at the same time?”

But the biggest side effect has been the memory loss. Short term and long term. Recent and going all the way back to my childhood. No memory whatsoever.

I’m having a conversation with a friend. She asked, matter-of-factly, “So, what’s your middle name?” Now, how in the heck do I explain the fact that I have no idea what my middle name is if I don’t want to say “shock treatment” and ”crazy”?

The technician at the ultrasound of my hip I needed on Tuesday asked if I’d had it x-rayed yet.
“Nope.”
A couple of minutes later, as she’s typing on the computer, she looks over at me, confused, and says, ‘It says here you had it x-rayed in January.”
Oops.

Kenny said I do the same thing with texting him questions throughout the day.
“Where do we keep the salt?”
“What’s a washing machine?”
“Who is ___ and why is she coming over to see Natalie?”
Over and over and over.

Oh, there’s so much more I could write about. Fact simply is, I’ve become an imbecile. OK. I know it’s not my fault, but when you can’t openly explain that they drummed bolts of electricity through my head and now I have no idea who the man coming into my house at the end of the day and kissing me hello is, it gets quite humiliating and embarrassing.

Alzheimer's. That has much more dignity to it. Or lobotomy. Yeah, that’s it. I’m not stupid. I just had brain surgery recently and they forgot to put some or all of it back.
I should print that on index cards and hand them out as I venture out in public.
Posted by Michele at 6:32 AM