MY SECRET LANGUAGE AT THE ROLLER DERBY 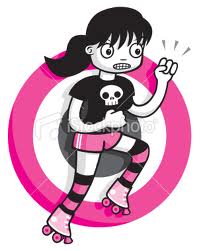 Having no money and three months of summer to spend in the house with three adolescent kids can equal quite a bit of frustration and boredom. Oh, I’ve done my share of  drolling out chores or taking them to the park, but the park gets old after a while and chores, well, let’s just say that doesn’t exactly make the complaining stop.  Luckily, we were blessed with a little spending money the other day, so Kenny and I decided to take the family on an outing to the local roller skating rink.

I used to roller skate all the time as a kid. I was hell on wheels. Skating around my neighborhood, up and down the parking lots (we lived across the street from an elementary school) and around the playgrounds, I could really get my groove thing on. I was hot. Then I grew up. Or rather, I grew old. I tried roller skating again a year ago and fell flat on my face—which is unusual since most people actually fall on their butt. So, this time around, I brought my Nook to read while the others got their groove thing on and I decided I’d just observe.

That place was loud! How do I know? Well, when you can feel pounding in your chest from outside in the lobby, you know you’re in for a treat to your eardrums. I needn’t worry about that though, right? I just found myself a seat and preceded to enjoy feeling my entire body vibrate to rap songs for the bulk of the evening.

After getting everyone situated, they all took off to have some fun. Two of my kids made their way to the beginner’s circle and sat there. They were too intimidated by all the people—scared it would turn into some sort of roller derby on wood. They saw that I was looking at them, so they started talking to me.

”There’s too many people here,” my daughter, Natalie, signed to me.

“Just stay close to the outside and you’ll be fine,” I signed back.

Next, my son chimed in: “Look at me! I can skate on one foot! AHHH!” He fell with a smack onto the floor. But he was still proud.

After making sure he wasn’t dying or didn’t have a concussion, I turned my attention to Kenny and the oldest, Mollie. They were getting down, going around the rink at lightning speed. I tried to talk with them. They tried to watch me…until they ran into the person on their side and knocked them down. Then it DID become a roller derby of sorts. But still—we had our “secret language!” I could communicate with any one of them from where I sat (safely)—something other moms and onlookers couldn’t do.

Sure, it caused accidents and broken limbs and lots of dirty looks. But don’t all good things? The point is, I like my language. I can use it anywhere. And, most of the time, the results are very promising and good. OK. Maybe once in a while its use results in a trip to the ER. Geez. Judge much? It’s a good thing (Not the ER—the signing). I like it. And at the roller rink I got to witness it in full motion.
Posted by Michele at 12:31 PM