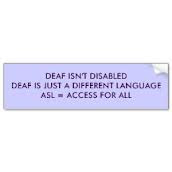 One of the strangest things I've noticed with people is the various interpretations of words as they use them. For example, take the word “rich.” Some people see that word and think of Donald Trump. Other people get raises or bonuses at work and think of themselves as rich. Still others, me included, find a $5 bill in their pocket and are on Cloud 9 for a week.

Another word that has a host of definitions is the word “disabled.” Even looking it up on various sites online, I found three definitions. But for the most part they read: “Physically or mentally impaired in a way that substantially limits activity, especially in relation to employment or education.” So, whom does that include? People in wheelchairs? Blind people? People with severe mental illness” Cancer? Diabetes? What about deaf people?

The Deaf community is a large and diverse group of people. In fact, some might think it odd, but it doesn't just include Deaf people. Hearing people from various backgrounds and careers can be part of the group, too. But let me just talk about the deafies for now. Are deaf people as a whole, “disabled”? Believe it or not, that is a question with a ton of different answers. Here’s what two separate groups might say….

Many people who lose their hearing as an adult do find adjustment extremely rough. Some never adjust. These people (late-deafened adults or adventitiously deaf) often consider themselves disabled due to being unable to willingly make the changes needed in their life. Communication can be horrible if they cannot lipread (I can’t) or never learn to sign. Many that had jobs, find themselves unable to continue on doing some things they were able to do in the past. And if that’s the way they've gone about living as a deaf person, they’re sure to think themselves disabled and, hopefully, seek help.

But tell a Culturally Deaf person they’re disabled and be prepared for a solid argument. Most believe Deaf people are not disabled—not impaired—they’re simply a minority group of people who live differently and communicate differently than their hearing acquaintances.

They can use the phone (video phones allow deaf people to do so with relative ease). They can express themselves fully using American Sign Language. They can work at most places with a little accommodation being given. They can go to school, get degrees, just like anyone else, if they’re given an interpreter. And so on and so on.

I personally fall into the middle physically between these two groups. I was born partially deaf, but my family raised me in the Hearing world since I could still hear some. I learned to speak, but often struggled to understand what was being said if the other person was not talking on my left side. However, I later lost the rest of my hearing. They describe hearing loss past 90 dB “profound,” but I’m not profoundly deaf, I’m totally deaf. There’s just nothing there.

When I became fully deaf, I started studying and learning ASL with a vengeance. I got many accommodations around the house I lived in (doorbell signaler, video phone, door knockers, vibrating alarm clock, etc). I also did a lot of research and finally went on to become a Sign Language teacher.

If someone were to ask me if I was disabled, I would have to say yes. WAIT!! Hear me out! (No pun intended.) I would say yes, but not because of my lack of hearing. I actually suffer from several severe mental illnesses that “substantially limit” my activity. So, that’s why I struggle. If I were not mentally ill, would I say I was disabled just by being deaf? Not at all. I’m not disabled by my deafness—I’m simply different.