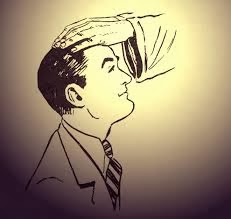 I’m not one to mince words. I’ve been known to be more than a little paranoid. Sometimes even closing in on a disorder of being too paranoid. But one day at the library, I just knew I was being followed.

It started out with me sitting by their fireplace reading a book. I had my hair pulled up in a ponytail, so my lack on an ear on the right side of my head was pretty much visible. I wouldn’t say “Lack of an ear.” There’s something there on my head, but it’s a deformity and usually makes people a little uncomfortable. If it were up to me, I’d charge people to touch it and see how much money I could make. “Hey, come touch my deformed head! Only $2.00!” I have yet to try that tactic. Hmmmm…….

So, I’m at the library, reading, enjoying the fire, and Kenny (my hubby) approaches, signs a few things to me, I sign back and he leaves. That’s when I noticed some young boy (maybe 16 or 17 years old) watching me like a hawk. I’m used to staring, but this just have me the heebie jeebies. So, I got up and walked towards the books and where Kenny was.

This boy, too, got up and started slowly following me through the rows and rows of books. I finally found Kenny and said, “Kenny, someone is following me!” For once, he actually considered that it might be true and told me to just stay there with him. And that’s when the boy approached the two of us.

I don’t know his exact words, but the way Kenny interpreted, it seemed that this boy goes to a charismatic church and believed that he could cure my deafness through Christ’s power by a putting on of hands (or whatever you call it). I looked at Kenny; Kenny shrugged. I figured what the heck and said OK. So, the boy cups his hands over my ears, prays and says something and then yelled, “Demons be gone!” (snicker) He then asked if it worked. Alas, no, No difference. “Well, it usually takes a while. Just keep the faith,” and he disappeared off into the other realms of the library.

That was years ago and I’m still stone deaf. Seriously, I don’t believe that it would have worked. It’s just not what I believe in. But the purpose of this story would be to say to my husband that sometimes I’m NOT just being paranoid. Deaf people have weird encounters with the hearing world. This was just one of many.
Posted by Michele at 5:05 PM