A DEAF PERSON'S GUIDE TO HOLIDAYS WITH NON-SIGNING FAMILY 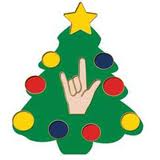