HE AIN'T AS GREAT AS THEY THINK HE IS 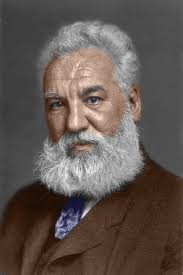 BOOOOOOOOOO!!!!!!!
When I begin an American Sign Language class, I try to make sure that everyone not only learns sign language, but perhaps most importantly, also learns about the population who uses it. Deafness is something that almost always shocks hearing people when they delve into such things as Deaf Culture and Deafhood and what they mean.
There are several capacities to our culture that many hearing people tend to shut their eyes to. However, not all are avoiding the subject; many are simply misinformed.
Deaf history is also very important to learn about if you’re interested in learning our language, so that people can see how far we’ve come in the past decade. We still have a heck of a ways to go though. And, inarguably, one of the biggest figures in the past movements of the deaf and hard of hearing was Alexander Graham Bell.
AG (as I will call him) is known by many individuals, organizations, and doctors, as a huge supporter of deaf and hard of hearing people. I mean, hey, he had a deaf wife, a deaf mother, and he invented the telephone as a way to try to help deaf people communicate. Thanks, man. Appreciate it. Didn’t work at all for us and actually caused more oppression, but, hey, you accomplished something. Right?
AG’s known in the Hearing world as a supporter, yet he is known in history to be anything but that. In fact, you see, AG was completely against Sign Language. He was completely against many things related to the deaf and hard of hearing. He was a strict oralist and, oh yeah,….
Ever heard of eugenics? Does World War II ring a bell? Hitler? Nazism? Well, remove one Adolph Hitler and replace him, at another time and place, with AG and you’re pretty close in deciphering his attitude to this “defective race.” Yes, I said “defective.” So did he.
See, AG had this theory that, if the country could keep deaf people separated and they didn’t socialize with each other, things would be easier. Deaf people would eventually disappear. If they could make a mandate that deaf people cannot marry, (and why not throw in some sterilization of deaf people?), they’d have the “problem” covered.
His reasoning? If deaf people didn’t have children and they stayed away from each other, “those kind of people” would eventually die off.  Nice. Kind of gives you a warm, tingly feeling, don’t it?
But, thankfully (times a million), his ideas didn’t stick for the entire COMMUNITY. Sure, there are definitely areas where oralism rules supreme, but there are also lots of places where ASL is accepted and Deaf people are simply a minority with their own language and customs.
As you can see, AG Bell, is one of the most well known advocates against Sign Language and yet ASL prevails. As George Veditz said a long time ago (1913), “As long as we have deaf people on earth, we will have signs.” It’s true. I guess I just wanted to get rid of people’s notions that AG helped the signing community. He may be, in my opinion, one of the most notorious figures in Deaf History.
Posted by Michele at 12:50 PM