CAN ANYONE HELP THIS DEAF "MAGOO"??? 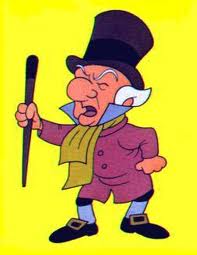 Whenever I get into a grouchy mood, I always make sure I let my husband know by telling him, “I’m a Magoo.” In case you don’t know him, Mr. Magoo was a very happy-go-lucky, almost blind cartoon character from when I was growing up—and before. Although, in general, he was a pleasant guy, I always think of Magoo from when he played the part of “Scrooge.” I pretty sure he got grumpy (not 100% sure though, but it’s enough for me…and Kenny knows what I’m talking about anyway). Therefore, when I say, “I’m a Magoo,” he knows what I mean: I’m in my hate-everything mood.
In fact, I’ve been a Magoo for quite some time this summer. Summer is usually a total Magoo season for me. I’m stuck at home with three kids who are always “bored,” with no money to go anywhere but the library or Speedway for a slushie, and with no friends to hang with. To add to that this year, I’ve been in charge of planning my parent-in-laws’ 50th wedding anniversary. And, after months of planning and sending out invites and buying decorations, the time has arrived for the party. It is to be held on the 16th of July (one week and one day from today).
There is a pretty big difference between my family growing up and my husband’s family growing up. My family is a bit more formal, while his parents are pretty low-keyed and easy going (when it comes to hanging out).  So, for MY parents’ 25th anniversary, we had a pretty fancy schmancy party. That was about 15 years ago. And this year, for KENNY’S parents’ 50th anniversary, we rented a pavilion at a nearby park, invited family from all over the country, and will be having a BBQ. To make matters even more casual, when my mother-in-law found out about the party, she immediately decided she would be the one to prepare the lunch.
And so the plan is for us to decorate, have lunch, do a toast, eat some cake and enjoy ourselves. At least, that’s my hope….for others. For me? I’m a Magoo. Sure, I’m excited about the decorating and I really hope they have a wonderful time. But that last part – “enjoy ourselves”?? That would include “me” and that’s one I don’t know if I’ll be able to do.
There I’ll be. One solitary deaf member of the family standing around in silence while 100 other hearing people surround me. I’d say, of the 100 people that are going to be there, only four of them have been around me since I became stone deaf. No one can sign. I can’t lipread. I am not a people person. All of these things make me cringe a bit when thinking of what’s to come.
So, I did what I normally do when I’m feeling something I’m thinking is wrong: I went to the library and got myself a book on happiness. Didn’t like it. Nothing they said made me happy. Phooey on them.
Then I got a book on optimism, but I never read it because it’s probably not any good anyway.
Next was a book on how to tolerate being around anyone annoying. I couldn’t read it. The picture on the cover annoyed me and the inside picture of the author made me very unhappy and pessimistic.
Finally, I got a book on appreciation. It wasn’t bad, though it probably wasn’t very hard to write. I mean, it’s not like the author had to work very hard to say, “You got it better than you think you did, so stop whining!” Yet, it did make me feel a bit more in place. (But it wasn’t making me appreciate anything either). Kidding…….
We leave for Illinois on Monday. The party is the following Sunday. I will have paper and pen in my hands, a keyboard sitting on the side of the table I’m sitting at, and a book to read as I hide in the corner. That’s my plan. But there’s gotta be more advice out there on having a relaxing time and making communication not as difficult besides, “Ask them to write,” and such.
Perhaps you have some advice for me? How to smile and actually enjoy myself for the long party and the visiting before and after (we’re talking days). Other than, “Stick close to your husband and kids so they can interpret for you.”
So, if you have any advice, now would be a great time to give it to me. I may be a Magoo, but, if I remember correctly, he was all ears (well, all head anyway). And I’m all eyes. Hit me with it!
Posted by Michele at 7:12 PM