CORRECTION: Make Them or Not? 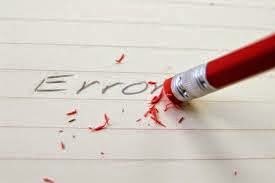 Before I started teaching American Sign Language, I made a lot of assumptions. I assumed that everyone knew never to wear black socks with shorts and white tennis shoes, that when people asked for your opinion, they actually wanted it, and that all Sign Language students wanted to be corrected if blatantly wrong. What I found out, though, is that I was three for three. Plenty of people don black socks in the summer. No one wants to know if such and such an outfit makes them look fat. And, many times, new signers (and some more experienced ones as well) don't want to know when they're signing wrong. Many just want to "amaze" you with their so-called ability and leave it at that.

I learned this the hard way. With my kids, they didn't get to say -- I had to correct them so they'd grow up to be at least partially fluent. Signing DESERVE when they meant MOST became a terrible habit, but at least it wasn't my hubby signing PENIS when he meant PERFECT. (In his defense, he only did this once -- in a group of Deaf people -- but I've teased him about it incessantly since.)

I can recall one time when my child's physical therapist invited me to go to a scrapbook party with some of her hearing friends. All was going well till the end when she decided to interpret a conversation for me. Now, this woman had only learned sign from a book. Which book? I do not know, but I would have guessed the book was titled, "50 Things Not to Do When You Sign."

As she chewed her gum and smiled hugely (over-enunciating as she signed), she started signing for me: BOSS DONT-WANT S-A-A ARREST HIS HAIR. WALK DESERVE BROTHER NOW INDEPENDENT WE. They all started giggling and clapping at their remark and then turned to me for my reaction. The look on my face was priceless. I looked like I was trying to hold off on a big fart. Huh??? I looked at my friend and she gave me the dirtiest look that clearly said, "Act like you know what's going on or I'll kill you." Again, I had no idea, so I asked for a repeat. She smiled politely and then signed the exact same thing again.

"I'm sorry, but I don't understand. Can you write that down for me?" Another woman picked up a pen and wrote, "The President doesn't know his ass from his head. Maybe the new guy can save us."

Ohhh!! I nodded and acted like it was funny. They left for easier conversations and I turned to my friend and started to show her how to sign those two sentences. She glared at me and walked away without saying anything. In fact, she never spoke to me again. Ever.

The longer I've been dealing with students, the more I'm realizing how being corrected can be quite the insult. However, if you truly want to learn -- and be correct while you're doing it -- you have to embrace the opportunity when fluent Deaf people offer their "services." I , also, have to learn when to show people the correct sign and when to smile and let it go. However, if you're my student, be prepared to learn. That's my job. I'm not there to clap and sign praises if you're wrong. That's why you hired me. But I am very nice about it.

BOTTOM LINE? Respect the language and learn as you go. Be around Deaf signers and get as much education from them as they offer. It's really the whole point, isn't it?
Posted by Michele at 6:15 PM