TO DARE TO TRUST 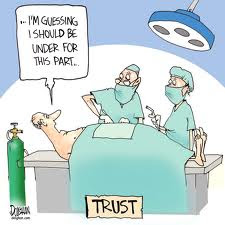 Yesterday, I was as prepared as I’ve ever been to present a beginner’s Deaf Culture/Sign Language workshop. I had my notes, I had my handouts and I was prepared to present the material in a witty and fascinating way.

It wasn’t too long ago that I did a similar presentation. I was just as prepared and had asked an interpreter to attend and voice for me. When she arrived, I gave her a copy of my outline and explained to her that I wanted the workshop to be light and relaxing. Since she already knew me pretty well, I told her to keep in mind my personality and try to be a little silly and fun in her voicing. She nodded and signed that it would be no problem and that I shouldn’t worry.

So, I decided to just go up there and have fun!

I began my workshop with the usual information about who I am, what Deaf Expressions is, what we will be doing….you know, ordinary stuff. As I introduced my husband, Kenny, and myself, I joked around. I teased him about his “creative” signing when he doesn’t know a sign, and I poked fun at myself as well. I was funny, darn it! But the audience just sat there. Their eyes were glazed over and a few even placed their chins into the cup of their palms and started to drool. Laughter? Smiles? Zilch.

I continued on with my presentation. Perhaps the audience simply didn’t think I was as much of a hoot as I thought I was. I began talking about Deaf Culture and telling some hilarious anecdotes about my experiences and the experiences of my Deaf and Hard of Hearing friends. Nothing. No reaction from the audience whatsoever.

Well, that’s not completely true. A few looked a little confused and glanced at each other. A few tried to stifle a yawn. A few more continued to drool and struggled to keep their eyes open.

As I was signing, I looked over at the interpreter and was shocked to find that she wasn’t even talking. I’m signing like crazy, making jokes, having fun, and the voice interpreter is struggling to understand and barely getting by.

It was about then that I decided we needed to call a break. While people were waking up and discussing things they found more interesting than my material (like the life of Justus von Liebig—Father of biochemistry, who recorded minerals in plant ash and proposed the law of minimum), I approached my husband and asked him what was happening.

Apparently, the interpreter, who I had entrusted with my voice, not only was struggling to keep up, but also had absolutely no personality whatsoever. All of my jokes and witty retorts were bombing, because no one was hearing them! What a nightmare!!

You know, when a Deaf person goes somewhere where they need an interpreter to voice for them, there is a lot of trust they have to give. Interpreters are trained to read ASL and express it with their voice in the manner that it is signed. If I’m mad, my interpreter had better sound mad as well. If I’m confused, I expect my interpreter to show that with their voice. And if I’m being light and funny and joking around, my interpreter should be highlighting that with her voice…especially if I’d taken the time before the presentation to specifically let her know that that is what I planned to do and that was what I needed from them.

And this interpreter knew me. She’s been around me a lot and knew how unserious I usually was. She knew how much I liked to have fun and involve my audience. She’d been to plenty of my workshops. She knew my style. At least I thought she did. And she had said it was going to be no problem. Yet, because of her, my presentation lacked the sense of humor that I wanted so adamantly to express.

Think about how difficult it is. It’s hard! If I go to an appointment and am immensely offended about something that is said to me, and I feel very strongly that I should stand up for myself, yet the hired interpreter is a timid person and afraid to sound “rude” or “mean,” what can I do? Chances are pretty good, that I’m not even going to know if she expressed it like I meant it. I have to sit there and live with whatever she says or does. If she doesn’t voice for me in an authoritative way, I get walked on and no one but me ever knows just how ticked off I was about it.

Trust. That’s what we have to do with our interpreters. Sure, we can request specific ‘terps who we feel comfortable with. But you have to start somewhere. You have to work with the people before you can start to feel comfortable with them. Not to mention that who we request isn’t always available. We are bound to deal with whoever is sent our way at some point in life. And that total stranger, we have to trust deeply. It’s downright scary!

Don’t get me wrong. I appreciate interpreters. (Most of them, anyway.) But I have found very, very few, who have been able to voice for me in the manner I intend for my signing to be taken. And it stinks!

If you’re an interpreter, you go to school, you practice, you take the exam, you get certified, but don’t stop there! With each and every appointment you are sent to, to act as a go-between between the Deaf or HOH person and whomever the meeting is with, it is vitally important that you get to know that individual and respect them and their personality. Don’t just voice however you would say things. Don’t just think, “Well, I got the idea across for the most part.” You have to BE that person’s voice.

Can you even imagine how scary and difficult it is to have someone else that you don’t know well express your ideas with their voice? If you don’t think it’s a big deal, try it. The next time your kid’s teacher wants to have a meeting to discuss your child’s shortcomings, hire a fellow interpreter (who you have not yet met) to voice for you. How confident can you be with this new person? Would you entrust a stranger to speak for you? Probably not. Yet, we deafies have to at times.

Be careful! Be courteous! And be clear. If you’re not sure what the Deaf person wants to convey…if you’re not 100% sure of their attitude about the information…ask!!! Because what you think you need to express and how you actually express it could make all the difference in the world to that person.
Posted by Michele at 5:49 PM