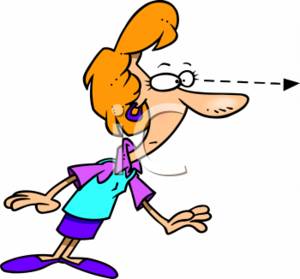 The Whitman’s were due for dinner and, knowing I would be the only deaf person here and that they don’t use sign language, I tried my best to brace myself for what was to come. As Dr. Phil would say, “This wasn’t my first rodeo.” I had my paper and pen, but, because my husband, Kenny, was going to be there, he was planning on interpreting. That was nice of him, wasn’t it?
As the guests arrived, Kenny and I stood at the door to welcome them. What I found myself face-to-face with was an elderly woman with blood-red lipstick that seemed to follow the wrinkles in the skin above her upper lip (making it seem she had a bright red mustache) and a man with a Frito-catcher around his face that would rival even Old St. Nick himself. Wow! If I were ever going to need a pen and paper or an interpreter, tonight would be the night!
We said our hellos, hugged, hung up their coats and got them a drink. I should have gotten me a stiff one, too. While all of that was taking place, Kenny engaged in a nice conversation with them, making sure to sign his part. But, honestly, I was not all that interested, so I busied myself in preparing the dinner table.
After I was done, all four of us sat down at the table to eat. This can be looked at as gross or upsetting on so many levels. First and foremost, there’s the fact that here sat at least two people who don’t understand why talking with their mouth full bothers me more than it seems to bother other people. What planet did they come from? Where in the Solar System does it say that it’s considered polite and OK to spit out their mashed potatoes at the same time they’re spitting out their consonants? Ew! That has always been a pet peeve of mine and it doesn’t necessarily have to do with being deaf and paying more attention to their faces and lips. Besides, what lips?
The bulk of the frustration I was dealing with was our chitchat. As the four of us sat around, Kenny would interpret what they were saying and he would be sure to sign what he was saying. The problem I ran into is the pattern it left:
They speak.
Kenny turns to me and signs what they said.
All people in the room watch me for my reaction to what was said.
All night long, they would talk and, when Kenny went to include me, everyone got a expectant face and wanted to know what I thought. I despise being the center of attention. I mean, make me some wallpaper that kind of blends into the paint and I’d be very happy. But when we have people over who don’t sign, this is what happens.
Sure, I could ask them to write to me instead of having Kenny interpret, but it seems a little odd to say, “You know, I hate it when my husband signs to me. Can you write that down?”
Perhaps it’s just me, but it seems redundant when he could have just as easily told me what was being said. It just bugs the bejeebas out of me when everyone wants to look at me for a reaction. I mean, sometimes I don’t have a reaction. I’m not going to look all excited and responsive with every single sentence. Just let me hang out. Don’t put me on cue. It’s just too much pressure. You know? I feel like it’s almost a, “Let’s see how the Deaf woman reacts,” kind of thing.
Kenny (signing and speaking): How many children do you have?
Guest (speaking only): I have three kids.
Kenny (interprets): Three children.
Everyone looks at me to see my response.
Me (signing and sometimes speaking): Wow! Three kids? That’s great!
But, really, what’s so great about it? I have three kids. I’d gladly give away one or two sometimes. But I don’t think me having three warrants a “great” response.
So, I tried another scenario:
Kenny (signing and speaking): Where do your kids go to school?
Guest (speaking only): They attend Grandville Middle School.
Kenny (interprets): Grandville Middle School.
Everyone looks at me to see my response.
Me: I nod my head with no real expression on my face. (Thinking: OK. Let’s move on.)
I mean, who cares? He’s just being polite. Why must I have a polite and positive reaction to every single thing we talk about? It’s exhausting!
I just want to be another face in the crowd. I want to socialize with people who are involved in my hearing kids’ lives, but I can’t be expected to do cartwheels and the Victory Dance after every tidbit of information.
Yes, I used to do theatre and such, and yes, I know what being on cue means. But No, I don’t like being in the spotlight and on cue all the time.
The question is (besides asking them to write something down), how do I get involved in the conversations with hearing folk (like in a group) who are standing around gabbing? Kenny interprets and that helps break the barrier down, but then everyone wants to see him sign to me and my reaction to that and that’s just annoying. That’s the word. Annoyed.
I’m a friendly person. I enjoy other people’s company, but I find socializing with hearing people who don’t sign to be just too tricky. Hey, people! Talk to me, involve me, but, please, don’t place such a huge expectation on me. I am not on cue.
Posted by Michele at 7:02 AM