PARDON ME WHILE I MAKE YOU FEEL INFERIOR 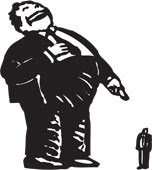 As I was preparing for my sign language class that was about to begin, two students arrived early. As is usually the case, they each entered, smiled sheepishly and sat down in silence. A few seconds of getting settled and one excitedly begins to speak. Signing awkwardly and speaking at the same time, she begins: “Oh my gosh! I was working on my signing vocabulary last week and you won’t believe what happened!” Becoming excited, she begins to speak at a lightning speed and all semblance of sign language is lost. She and the other student engage in a very animated and enthusiastic discussion while I look on. When she’s finished, she turns me with wide eyes and smiles expectedly. But I haven’t the faintest clue what she’s just said.

I look at her and ask, “So, what exactly happened last week when you were working on your sign vocabulary? It seems exciting.”

“Well, I was …” Again, her frantic behavior and rapid speech made it virtually impossible for me to comprehend any word or sign she uttered.

“Wait!” I stopped her before she went on. “I can’t understand you. You need to slow down. Can you sign it?”

A moment of obvious discomfort later, she shifts in her chair. Finally, she looks up and, with a sympathetic expression, states, “Never mind. It’s not important.”

Try to imagine how you would feel if you went to a party and someone tells the most hilarious joke ever at just the moment your child tugs at your shirt and distracts you. The crowd breaks out in guffaws and screams of delight. When finished with your child’s needs, you look up and eagerly ask, “What was so funny?” Now imagine that the only response you get is someone brushing you off while saying, “Oh, it’s not important,” and then abandoning you for others in the crowd who actually know what’s going on. Doesn’t feel so hot, does it?

It doesn’t matter whether what you were saying was some stupid joke you heard from your five-year-old or a grand soliloquy your boss gave before he fired you, if it’s important enough to say once, to, say, a hearing person who is easy to converse with, it’s important enough to figure out a way to help the hearing-impaired person you’re with to understand what you were sharing.

In other words, sign, speak (clearly), mime, gesture, or write, but DO repeat it for us. Let us decide if it was worth all that effort. Because, whether you mean it or not, “Never mind,” can have much the same impact as turning to that person and telling them to go to hell.
Posted by Michele at 5:05 PM