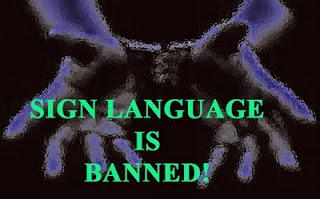 As defined at http://en.wiktionary.org/wiki/oralism:
Oralism: A philosophy of education for the deaf, opposed to manualism, that uses spoken language consisting of lipreading, speech, the process of watching mouth movements, and mastering breathing techniques.

September 6 – 11, 1880, in the city of Milan, Italy, a group of 164 participants attended the 2nd International Congress on Education of the Deaf (ICED). The Milan Conference was organized by the Pereire Society. This society was a strong supporter of oralism. They organized the Milan conference with the intent to ban sign language. And they secured this outcome by carefully selecting who was invited, inviting the delegates to see the oralist success in a local school, and by encouraging negative reactions to those giving speeches supporting sign language and cheering those supporting oralism.

This convention consisted of 87 Italians, 56 Frenchmen, 8 Englishmen, 5 Americans, and 8 other delegates. Not a lot of diverse representation for an “international” meeting. During the conference there were 12 speakers who gave their opinions on the issues connected with deaf education. Nine of the 12 speakers gave an oralist view and 3 supported the use of sign language.

At the meeting, the members voted overwhelmingly to outlaw the use of sign language as a method for educating deaf children, in favor of the pure oral method. The group also opposed a compromise motion to include sign language along with speech. And thus began an attempt to abolish the language of Sign.

The original resolutions passed at this meeting did irreparable damage to deaf individuals, educators, professionals, schools and communities around the world. Thankfully, perhaps due to the fact that Gallaudet College (now University) refused to abandon the use of sign and to the founding of the National Association of the Deaf, ASL has persevered. Regardless of what the extremists and strict oralists believe, ASL is the language of the Deaf and always will be.

I was ecstatic to find that, on Monday, July 19th of this year, the International Congress of the Deaf opened its 21st Congress with a historic announcement that it formally rejects the resolutions passed at the 2nd Congress. This move in part was due to the letters and actions from advocacy organizations and leaders throughout the world urging the ICED to embrace signed languages and deaf cultures.

NAD’s President, Bobbie Beth Scoggins, had this to say about the monumental proclamation:

"We are elated to see that, for the first time in 130 years, the ICED has joined us in rejecting the actions of its predecessors and moving forward to improve educational systems for the global deaf and hard of hearing community. We are grateful and proud to see the ICED take this important and very appropriate step towards reconciliation. The formal rejection of the 1880 resolutions made in Milan by the ICED realizes a dream that we have had for 130 years. Together with the ICED we have taken the first steps towards a beautiful, bilingual future of cooperation and mutual respect."

Here’s to a new and brighter future for our deaf and hard of hearing students! Let’s let them use what works for each, instead of a contrived notion that oralism is the only way!
Posted by Michele at 5:24 PM